Toefl listening sample including a full transcript of the text. Once again listen to the different American accents and use subtitles if necessary.
TOEFL Listening 3

Please listen to this Toefl listening sample and reply to the questions. 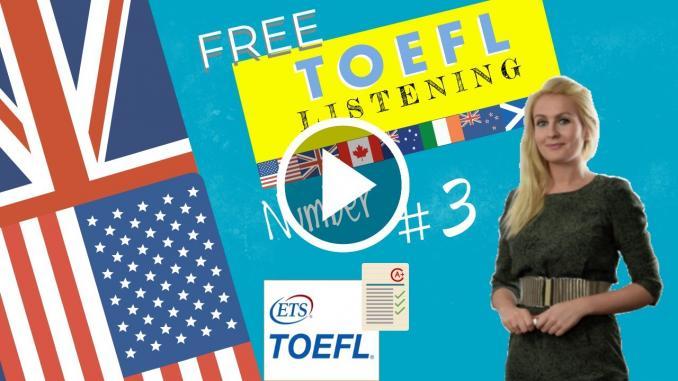 Listen out for the main idea

In most cases, the first question after each lecture is a main idea question also known as the “gist” question. At the beginning of a listening lecture, the professor “usually” mentions what the main topic of the lecture is be about, but sometimes the topic might be refined into something more specific. The topic can evolve, so look out any new topics.

Listen to the speaker’s tone of voice

Sometimes you’ll be asked questions regarding the speaker’s attitude or opinion. To answer these questions correctly, you have to listen to the tone of voice of the speaker. Does the speaker sound annoyed, excited, confused, sad…etc?

Listen out for how the ideas are connected throughout the lecture.

When listening to a lecture, make note of the way the ideas in the lecture are connected. In other words, how the professor organized the lecture. When you encounter a question asking you how the lecture is organized, you can refer back to your notes. Some of the main relationships between ideas include cause/effect, compare/contrast, and steps in a process.

Listen out for key points not specific details.

TOEFL listening questions will not test you on small details. For example, you won’t see questions that are about a specific year, name, or location. Instead, questions will test your understanding of key points mentioned in the lecture.

Listen for signal words that indicate different parts of the lecture.

To help you capture key points in the lecture, you need to learn to listen for signal words or transition words. These words are like the road signs that tell you what is coming next. Signal words can tell you the beginning or the end of a topic. They can also help you move through the middle of the lecture by introducing topics.

“Signal words” give hints about what is about to happen in what you’re reading. Understanding them is a key to comprehension. Reading and making up examples which use them is a good way to understand them.

Pay attention to the following transition words which can help you capture the main ideas and examples:

As each listening passage starts, the narrator will inform you of the main topic of the academic talk or dialogue so you have a slight idea of what to expect. No matter what the topic is, you should be able to understand what the main idea of the passage is. This is what this question type expects you to answer. Almost all of the prompts will include the word “mainly” in it so this type is easy to identify.

Example: Transcript of passage you would HEAR:

Narrator: Listen to part of a lecture from a chemistry class.

Professor: Ok, put away your lab coats please. Today we’re going to cover a bit of history. Yes, yes, I know, this is a chemistry class, not a history class, but we’ll be talking about the history of that most famous of chemical diagrams, the periodic table of elements. Open up your textbooks to page 143.

To understand where the table comes from, first we need to look back to when the Greek philosopher Aristotle proposed that everything is divided into four main elements: earth, fire, air, and water. Although it doesn’t sound very scientific to us now, Aristotle was actually closer to describing the four states of matter than he was in pinpointing the elements. I mean… solid, liquid, gas, and plasma. Nevertheless, Aristotle’s initial classification of matter into four main types laid the groundwork for future scientists to ultimately discover and understand the properties of all of the individual elements we know today. The discovery of elements was a gradual process, with many different scientists having a hand in the discoveries. For example, in 1669 and 1680, both Hennig Brand and Robert Boyle independently discovered phosphorus. In 1789, Antoine Lavoisier published his Treaty on the Chemical Elements, in which he defined for the first time what an element actually is, and included a list. The list continued to grow.

As more and more elements were discovered, scientists around the world searched for a way to classify them. Now, they knew that elements interacted with each other in predictable ways. Several different methods to classify the elements were proposed. The first to notice a pattern within the elements was the chemist Johann Dobereiner. In 1829, he proposed a system called the Law of Triads in which he arranged the elements according to their atomic mass in groups of three. Then, in 1862, French geologist A.E. Beguyer de Chancourtois noticed that when ordered by atomic weights, similar elements would occur with a certain regularity. This characteristic is known as periodicity. Chancourtois used this discovery to classify the elements into a spiral form based on weight, which he published in 1862. It was the first actual written classification of the elements (therefore you could technically call it the first periodic table) although it was largely ignored at the time. Turn to page 144 for an excerpt. In 1863, John Newlands created a system he called the Law of Octaves. He compared his method of classification to that of musical octaves, saying that at intervals of eight, elements show repetition in chemical and physical properties. Newlands grouped the 56 known elements into 11 groups. His system was also not widely accepted.

It was a Russian who ultimately solved the puzzle. Dmitri Mendeleev published in 1869 what is now considered the first accurate periodic table of elements. His paper was called On the Relationships of the Properties of the Elements to Their Atomic Weights. He arranged all the known elements by atomic mass (65 at the time) but… and this is important… not exclusively. In order to fit with their recurring chemical and physical properties, some elements had to be moved to places where their mass did not match up. He tidied up the work of his predecessors and contemporaries (correcting mistakes in atomic mass and such) to make his table more accurate, but some elements were still not listed according to their mass as he and his contemporaries believed they should be. So, Mendeleev went on to predict the discovery of several new elements, which he saw as gaps in his chart. He even left the blanks in his published copy. He plotted all the known elements based on their recurring – or periodic – characteristics, and because of this he was able to even predict the properties of the missing elements. And, for the most part, he was right. His table had more rows than previous attempts at classification, which highlighted related elements’ recurring characteristics by placing them in the same column. Interestingly, a German chemist named Lothar Meyer produced, completely independently of Mendeleev’s work – a very similar periodic table. Unfortunately for him though, it was published the year after Mendeleev’s and so Mendeleev is generally credited with creating the periodic table.

Mendeleev’s periodic table became the accepted method of classification of the elements, but there have been some changes made since. When the noble gases were discovered in the late 1800’s, these were added to the table in their own group. And as atomic science progressed, more information has been added to each of the elements. Scientists such as Rutherford, Moseley, and Bohr all contributed significantly to the understanding of elemental properties on an atomic level. Glenn Seaborg, an American scientist, helped to discover the transuranic elements in the 1940’s and has an element named after him… Seaborgium, element 106.