B1 B2 Exam Preparation Lesson 6: Fame

The rise of social media and celebrity

The rise of social media over the past ten years has radically changed how we perceive “celebrities” and the corporate machine around them.
MTV, for instance, has played a powerful role in directing the energies of social media towards its products. The station is founded upon a series of rolling advertisements designed to sell the passing fancy of the pop song. Ephemera sells ephemera. Little wonder, then, that when MTV began to invest in television series it chose reality TV.
From The Real World in the eighties to Geordie Shore today, MTV has utilised the ambitions of a generation to be famous. Striving is the theme throughout. Once the series is over, the participants’ lack of talent means they have no reason to dwindle upon the stage beyond the fact that they have got used to it.
Such individuals represent the core of the D-List. They are flexible, interchangeable and redundant. In order to hang on to the vestiges of fame and its attendant majesty they have to work. The form of labour they undertake, and our own contributions, are fundamental to the many fluttering engines of social media.
MTV’s official website requests contributions asking us on every other page “what do you think?” Our response is not just a digital register of engagement but also represents information on MTV’s consumer base that can be utilised to introduce targeted programmes and adverts. To entice us into a world already deeply invested in the ephemeral, the website offers “behind the scenes” snaps of couples who appeared to be onscreen enemies holidaying together while on promotional tours for the show.
The participants in the show are all upfront and determined to work on the product of their self and so they self-brand with matchless enthusiasm, utilising every media outlet as an opportunity to disseminate their commodity-identity. To go back to ordinary life is to be “nothing” and it is this fear of being forgotten that drives them on.
They set up their own websites, hire agents and managers and trainers and publicists. In short, they work. When we fire up the engines of social media by engaging with them, we provide some of the energy they need to sustain their little treadmills of celebrity. While they dance on the fringes of the D-List and feast on glitter pies we hover over the keyboard awaiting direction to the next passing fancy.
When pop stars, newsreaders, actors and sports-folk tweet their biscuit-choosing dilemmas it seems for a twinkling moment as if celebrity and fan both dwell in a flattened out universe in which they are just like us, hovering over the Hobnobs.
This cosy illusion hides a very old fashioned commercial imperative. Social media has distracted attention away from the corporate directive and offers instead the illusion that we are in charge. It is precisely because responding feels so light and ephemeral that we consider our engagement with it as a sort of game.
And yet beneath this bonanza of banality remains a newly flexible apparatus of big business, relentlessly pursuing profit.

Is Annie Lennox really the only notable woman composer?

Last week, Jude Kelly, artistic director of London’s prestigious Southbank Centre, was the most recent arts luminary to wonder in public why women in music are rarer than English cricket victories in Australia, saying that:
Women still tell me they find orchestras can be hostile, can undermine them deliberately, that executive directors can be sceptical.
If anything Kelly paints an optimistic picture. At the turn of the century I asked the readers of the arts section of London’s Sunday Times newspaper to nominate the greatest pop musicians and classical composers of all time. Only one woman (Annie Lennox) made the top 10 most nominated pop musicians, and no female classical composer received more than a single nomination.
It’s not just music that undervalues women. The same survey showed that no works by women could be found in lists of the readers’ 10 favourite plays, films, or paintings; and another survey of the greatest art works produced in the second millennium of the Common Era showed just one work by a woman (Pride and Prejudice) in the top 50. So the respondents apparently believed that half the population produced just one notable piece of art in 1,000 years, an average that would embarrass even an English batsman.
I’m sure there are conservative web sites full of pseudoscientific claims that women really are less creative. But a way more convincing explanation is provided by a classic experiment carried out in 1968 in which females were asked to grade six essays on 54 different dimensions. Everyone read the same essays, but sometimes the work was attributed to a Henry and sometimes to a Henrietta. Articles allegedly by men were given higher ratings on 44 of the 54 dimensions. In other words, the lack of well-respected women across all the arts is most likely due to classic misogyny.

So is there anything different about misogyny in music? Well maybe, since it seems that knowing a composer’s sex influences some very fundamental responses that we have to his/her music. A few years ago, I repeated the classic 1968 experiment but replaced essays with pieces of classical, jazz, and new age music. Information on the sex of the supposed composer influenced perceptions of the qualities of the music itself, such as whether it was perceived as forceful, soothing or gentle. Also, the respondents had clear ideas as to which genres were more suitable for the sexes: they expected jazz to be composed by men, whereas it was more acceptable for women to compose new age music.
In a follow up study the anti-female bias was strongest when we told respondents only the name of the composer, and weaker when we also provided a brief biography about him/her: as with most research on biases and stereotypes, the anti-female bias in music is strongest when respondents have little other information on which to base their judgement. So, one of the best ways to reduce misogyny in music will be to provide audiences with detailed information about the music women are producing: more words, and fewer pictures please.
In the meantime, you might have heard about the Bechdel test, which defines a non-sexist movie as one in which there are two named women characters who talk to each other about something other than a man. Next time you choose a radio station, you might want to think about when was the last time you heard a song by a woman aged over 30 that addressed something other than interpersonal relationships.
If enough of us do it then we could break a 1,000 year old record and identify two well-respected and widely-recognised female musicians in the next millennium.

ESSAY: There is a glass ceiling for women in the arts. Do you agree with this statement?

LETTER: You feel that an advertisement on dieting is not suitable for showing on children’s TV. Write a letter of complaint to the television company.

GRAPH DESCRIPTION:
This graph show the percentage of people by age and sex, that watch reality television frequently (Source: TGI Latina).
Summarise the  information by selecting and reporting the main features, and make comparisons where relevant. 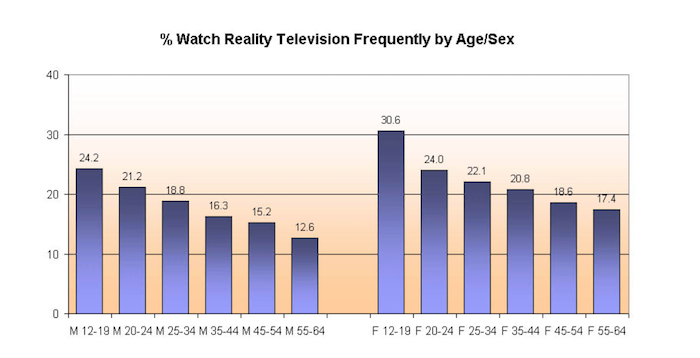 REPORT: Write a report on how television and social media is used by people to claim their 15 minutes of fame.

REVIEW: You have just watched a documentary on a child actor who has grown up into a drugs and alcohol problem. Write a review on the issues and triggers that may have led to this downward spiral.

PROPOSAL: Write a proposal for a new reality television show.