I’m Leta Hong Fincher and I’m the author of the book “Leftover Women: The Resurgence of Gender Inequality in China”.

I came upon the term “Sheng Nu”: Leftover Women, in one of the interviews that I did with a young woman who is 26 years old, and she was about to get married, and she had just purchased a marital home with her boyfriend, but she had left her name off the property deed, in spite of the fact that she had transferred all of her life savings over to her boyfriend. So, I asked her why she was doing that. Why didn’t she put her name on the deed? And then, she said that she was at that, so called, leftover age, and she was very worried about getting married quickly, otherwise she would become too old to find a husband.

When I looked into the origins of the term “Leftover Women” I realised that in January 2007, China state council came out with a very important population decision, and this decision says that China faces unprecedented population pressures, due to the so called “low quality of its population”, that will make it very difficult for China to compete in the global market place. So, the government set a key goal of so called “Upgrading population quality” and, I argue that this attempt to upgrade population quality is really closely linked to the aggressive pushing of the term “Leftover Women”, stigmatising the urban educated women who are considered to be, by the government, the highest quality people in the population, to get them to hurry up and marry, and have a child for the good of the nation.

Another reason why I believe the government is really aggressively pushing urban educated women in their 20s to get married is simply because it wants to promote social stability. China has a sex ratio imbalance that’s very severe. There are about 117 boys born, for every 100 girls, and that’s resulted in an excess tens of millions of men who will be unable to find brides in the future. And so, I believe that this marriage promotion campaign is really focusing on getting the most educated women, in China, to lower their standards and to marry some of these excess men in the population, and that this marriage promotion will help to promote social stability.

One of the things I focus on in this book is the very close link between marriage and home buying in China. There’s, in addition to intense pressure to marry, there’s intense pressure to buy a very expensive home on the private real estate market. And, I argue that Chinese women have been shut out of, what is probably, the largest accumulation of residential property wealth in history. Which is worth over 30 trillion US dollars, as of last year. And, this is due to a lot of factors. Most homes in China tend to be registered only in the man’s name. Parents in China tend to buy homes only for their sons, and not for their daughters. And, many of the women getting married often transfer their life savings over to their boyfriends or their fiancee, to finance the purchase of a marital home. But then the women leave their name off the deed. So, they’re forfeiting ownership of this incredibly valuable asset, which is the most valuable asset in the Chinese household. And, I believe this is linked, in part, to the intense stigma of being single in China, as an educated woman. Some of the women have told me that they are too anxious about not finding another husband, and so that’s why don’t want to push too aggressively to put their name on the property deed.

Well, China has a really severe epidemic of domestic violence. Official statistics say that about a quarter of married women have suffered domestic violence. But, when you talk to feminist activists working on this issue, they say that the real incidents of domestic violence is much higher than that. And I argue that women’s lack of property rights in China is closely linked to the prevalence of domestic violence, because when women’s husbands abuse them, they have nowhere else to go to. They don’t own that marital home, and there are also very few, or in some cases, no shelters for battered women. And, these women who are abused by their husbands have basically no recourse.  There’s no law targeting domestic violence in China, despite many many years of intense lobbying on the part of feminist lawyers and activists.

I’ve met quite a lot of very inspiring and extremely courageous feminist activists in China, and I have a tremendous amount of respect and admiration for them. Unfortunately, China really cracking down hard on women’s rights groups, on all sorts of groups. There is a real crackdown on civil society. The government is really afraid of any organisation that poses any hint of a political threat to communist party rule. And so, given the current climate, and the difficulty of organising for any kind of rights movement, at all, let alone women’s rights, I’m, at the moment, not very optimistic about a nationwide women’s right movement. But, I do have hope, after the meetings I have had with women who, on an individual level, are able to empower themselves, and realise that they don’t necessarily have to get married. That it’s up to them. They can have an alternate path in life, and they can have a very happy life on their own, as a single person. They don’t absolutely have to get married.

Beth Gaze
Associate Professor of Law at University of Melbourne

We’ve all seen the reports of studies demonstrating women’s inequality at work. It is well established that women are disproportionately under-represented in higher paid positions and industries, and that there is a gender pay gap of 17.5% between men and women. Lack of pay equity and equal opportunities are the elephants in the room for every woman in the Australian workforce.

Although the causes are complex, research suggests they are based in deep cultural expectations and stereotypes that are not to do with the efforts of individual women at work. Studies have shown that when identical CVs are sent out with male and female names attached, the male CVs receive more interest from employers and more favourable assessments. So these issues can’t be simply dismissed as the result of lack of interest by women. Instead, we need to look at the ways workforce structures and practices, developed to suit the historical male role of full-time breadwinner, might tend to exclude women and limit their opportunities.
Australia’s legislation requiring employers to provide equal opportunity programs for women at work (the Equal Employment for Women at Work Act 1986 has now been amended and renamed the Workplace Gender Equality Act. It now aims to ensure equality at work for both women and men, with a focus on sex discrimination and treatment of workers with caring responsibilities.

Who’s covered?
The act applies to the same employers as the previous law: all higher education institutions and non-government employers of more than 100 employees are covered. The exclusion of small businesses appears to be an acknowledgement that smaller organisations may not have the human resources capacity to comply with the requirements. Public employment is also excluded.
Some areas, such as Commonwealth authorities and some state government employment are covered by other laws that impose equal employment opportunity requirements, and the law assumes that governments will adopt their own measures on gender and other grounds such as disability.

What’s new?
Over its 26-year life, the Act has had limited impact on gender inequality at work.
The new requirements apply to employers for the next reporting period ending in March 2014. Employers will no longer have to prepare an equal employment opportunity program to lodge with the renamed Workplace Gender Equality Agency set up by the Act. Instead, they will be required to report on “gender equality indicators”. These will include:
◦ The gender composition of the workforce, and of any governing body such as a council or board of directors.
◦ Equal remuneration between women and men in their workforce.
◦ Availability and usefulness of employment terms, conditions and practices relating to flexible work, or supporting employees with family or caring responsibilities.

A new level of publicity will also be added. Most of the data reported to the Agency will be publicly available, and employers will be required to notify employees and shareholders of their reports and allow them an opportunity to comment. As a result, the Act will now require the production of data on employers’ performance that is widely disseminated and publicly available. This approach accords with the modern management maxim “what gets measured gets done”, and that transparency improves accountability, ensuring that actions are taken.
Minimum standards will be defined over time by the minister responsible via regulation from 2013. These are intended to be industry-specific, and failure to comply with minimum standards will be a breach of the Act. The Agency will be required to report to the minister every two years on progress towards equal opportunity for women at work.

Will it work?
Will it make a difference? It is clear that deep cultural change will be needed to move away from stereotypical expectations about the incompatibility of femininity and leadership; women’s inherent responsibility for childcare; and the “normal” worker being a full-time worker free of caring responsibilities according to the historical male model. In individual organisations, change occurs when it is championed with commitment from the top.
Law is limited in the extent to which it can force organisations to change their ways. It is not an automatic or complete solution. But the new approach has substantial potential to increase the accountability of organisations and encourage change in the necessary direction.
It will begin to build a record of data about gender equity in individual organisations and the workforce generally that is not otherwise available. Individual women will even be able to check the gender equity record of organisations they might be seeking work with.
The Act seeks to balance the need for change with the interests of employers in manageable requirements. Time will tell whether this balance has been effectively struck or needs further adjustment.
(Source: http://theconversation.com/gender-equality-act-wont-fix-discrimination-but-it-will-make-employers-accountable-10980)

ESSAY: Do you know of any national stereotypes. Do you think they can be damaging, offensive, funny, and/or realistic?

LETTER: You feel that you have been treated differently to your male or female counterpart, on the part of your supervisor. Write a letter to HR explaining the unfair situation and asking for advice on steps to follow.

REPORT: Write a report on the median usual weekly earnings of women, by industry, in 2009, based on the graph. (Source: US Bureau of Labor Statistics). 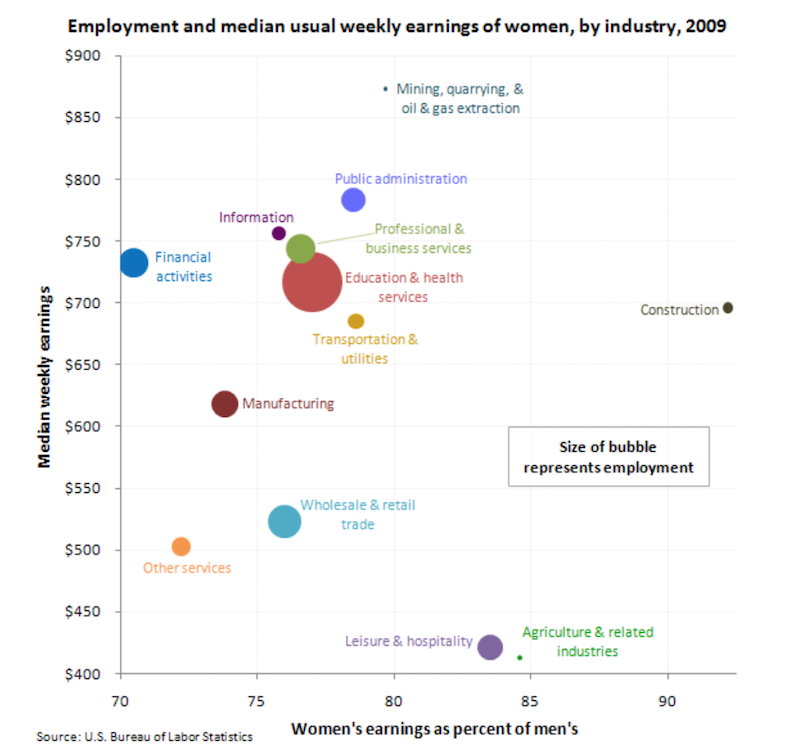 GRAPH DESCRIPTION:
Gender Pay Gap over time in the US (Source: Wikipedia).
This visual aid shows gender pay gap over time. Summarise the information by selecting and reporting the main features, and make comparisons where relevant. 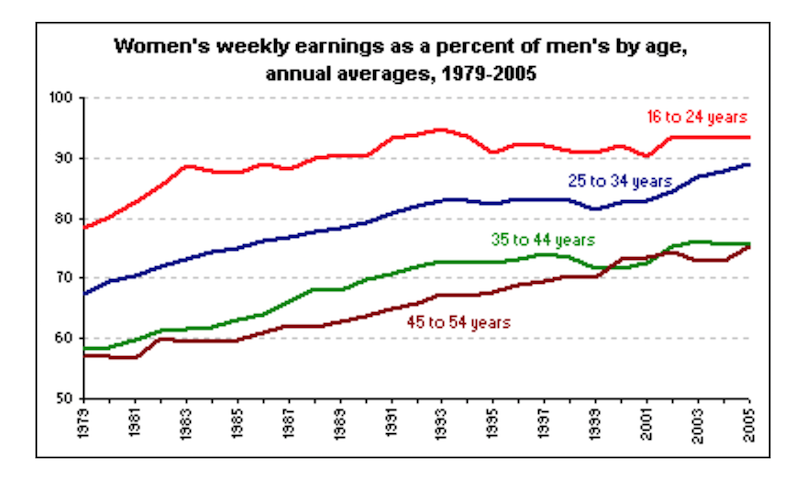 REVIEW: You have just watched a children’s animated movie with stereotypes such as princesses and princes. How do you think such gender role biased characters affect how children view society?

PROPOSAL: You are asked by your superior to improve the atmosphere at work. The suggestions given may include: facilities, communication, events…