Train fares will increase by an average of 2.2%. Inevitably this will lead to complaints of overpricing, as the government seeks to reduce the subsidy offered by taxpayers to railway companies.
Train prices bear little resemblance to the length of a journey. The London to Edinburgh line is an excellent example of this. An anytime single ticket from London to Edinburgh cost £152 in 2014. That’s just £1.50 more than the fare from London to Newcastle, even though the two cities are more than 100 miles apart.
Advance tickets and railcards don’t necessarily make travel cheaper either, and both are highly affected by demand. Train companies often advertise that advance tickets can be bought up to 12 weeks before travel but that’s not the same as guaranteeing that the cheapest train tickets are released 12 weeks before the date of departure. Such prices are released at the discretion of the train company. Indeed, in many high-demand periods, such as during school holidays or over Christmas, the cheapest tickets are not released 12 weeks before.
And your railcard might look like a cost-saving purchase, but it can often only be used at certain times of day, or with minimum fare restrictions. It can sometimes even be cheaper to travel without a railcard than using one.
Many travellers are unaware of these inconsistencies and continue to focus on the annual January price hike when appealing for a fairer system. Part of the problem is the fact that fares have become so complicated, with advanced purchase tickets, railcards and other group discounts further muddying the waters.
But this is exactly how train companies will counter opposition to train fare increases this and every other January. They will maintain that cheap fares do exist (without mentioning that these are limited to advance tickets), and indeed, taking the time to navigate the confusing world of ticket purchasing can yield results.
But the extent to which it is possible to get a cheap deal is, in most cases, very limited and finding those tickets involves a level of time commitment that most people will not be willing to make.
Train companies should have some responsibility for making sure commuters can get the cheapest tickets more easily. It is also time for an integrated ticketing system that means travellers switching trains or travelling with different train operators don’t get a raw deal.
Ticketing structures for train journeys need to be overhauled as a matter of urgency if passengers are to have any confidence in planned fare increases. That is the argument they should be making, regardless of how much prices go up by.

Longing for the ‘golden age’ of air travel?

Janet Bednarek
Professor of History at University of Dayton

Long lines at security checkpoints, tiny plastic cups of soda, small bags of pretzels, planes filled to capacity, fees attached to every amenity – all reflect the realities of 21st century commercial air travel. It’s no wonder that many travelers have become nostalgic for the so-called “golden age” of air travel in the United States.

During the 1950s, airlines promoted commercial air travel as glamorous: stewardesses served full meals on real china, airline seats were large (and frequently empty) with ample legroom, and passengers always dressed well.
After jets were introduced in the late 1950s, passengers could travel to even the most distant locations at speeds unimaginable a mere decade before. An airline trip from New York to London that could take up to 15 hours in the early 1950s could be made in less than seven hours by the early 1960s.

But airline nostalgia can be tricky, and “golden ages” are seldom as idyllic as they seem.
Until the introduction of jets in 1958, most of the nation’s commercial planes were propeller-driven aircraft, like the DC-4. Most of these planes were unpressurized, and with a maximum cruising altitude of 10,000 to 12,000 feet, they were unable to fly over bad weather. Delays were frequent, turbulence common, and air sickness bags often needed.
Some planes were spacious and pressurized: the Boeing Stratocruiser, for example, could seat 50 first class passengers or 81 coach passengers compared to the DC-3’s 21 passengers. It could cruise at 32,000 feet, which allowed Stratocruiser to fly above most bad weather it encountered. But only 56 of these planes were ever in service.
While the later DC-6 and DC-7 were pressurized, they still flew much lower than the soon-to-appear jets – 20,000 feet compared to 30,000 feet – and often encountered turbulence. The piston engines were bulky, complex and difficult to maintain, which contributed to frequent delays.

For much of this period, the old saying “Time to spare, go by air” still rang true.
Through the 1930s and into the 1940s, almost everyone flew first class. Airlines did encourage more people to fly in the 1950s and 1960s by introducing coach or tourist fares, but the savings were relative: less expensive than first class, but still pricey. In 1955, for example, so-called “bargain fares” from New York to Paris were the equivalent of just over $2,600 in 2014 dollars. Although the advent of jets did result in lower fares, the cost was still out of reach of most Americans. The most likely frequent flier was a white, male businessman traveling on his company’s expense account, and in the 1960s, airlines – with young attractive stewardesses in short skirts – clearly catered to their most frequent flyers.
The demographics of travelers did begin to shift during this period. More women, more young people, and retirees began to fly; still, airline travel remained financially out-of-reach for most.
If it was a golden age, it only was for the very few.

People also forget that well into the 1960s, air travel was far more dangerous than it is today. In the 1950s and 1960s US airlines experienced at least a half dozen crashes per year – most leading to fatalities of all on board. People today may bemoan the crowded airplanes and lack of on-board amenities, but the number of fatalities per million miles flown has dropped dramatically since since the late 1970s, especially compared to the 1960s. Through at least the 1970s, airports even prominently featured kiosks selling flight insurance.
And we can’t forget hijackings. By the mid-1960s so many airplanes had been hijacked that “Take me to Cuba” became a punchline for stand-up comics. In 1971 D.B. Cooper – a hijacker who parachuted from a Boeing 727 after extorting $200,000 – might have been able to achieve folk hero status. But one reason US airline passengers today (generally) tolerate security checkpoints is that they want some kind of assurance that their aircraft will remain safe.
And if the previous examples don’t dull the sheen of air travel’s “golden age,” remember: in-flight smoking was both permitted and encouraged.
(Source: https://theconversation.com/longing-for-the-golden-age-of-air-travel-be-careful-what-you-wish-for-34177)

ESSAY: It is better to live in a small town than in a big city. Do you agree with this statement?

LETTER: You feel that banning cars from the city centre is going to have a negative effect on your business. Write a letter of complaint to the local council.

REVIEW: You have just been on a sightseeing tour of London by bike. Write a review on your experience.

PROPOSAL: Write a proposal on how to improve transport in your city, based on your personal experience.

GRAPH DESCRIPTION:
Commuter Belt: Our graph shows the average price of homes in towns outside London as well as the average annual rail ticket cost. (Source: Dailymail.co.uk)
Summarise the information by selecting and reporting the main features, and make comparisons where relevant. 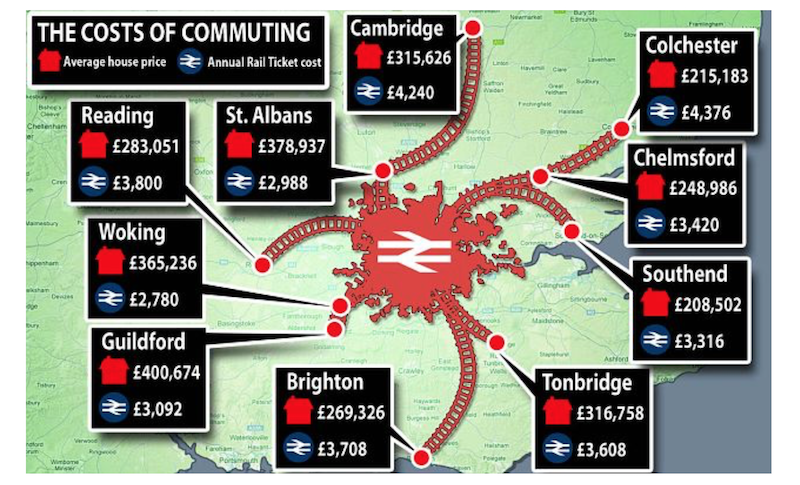 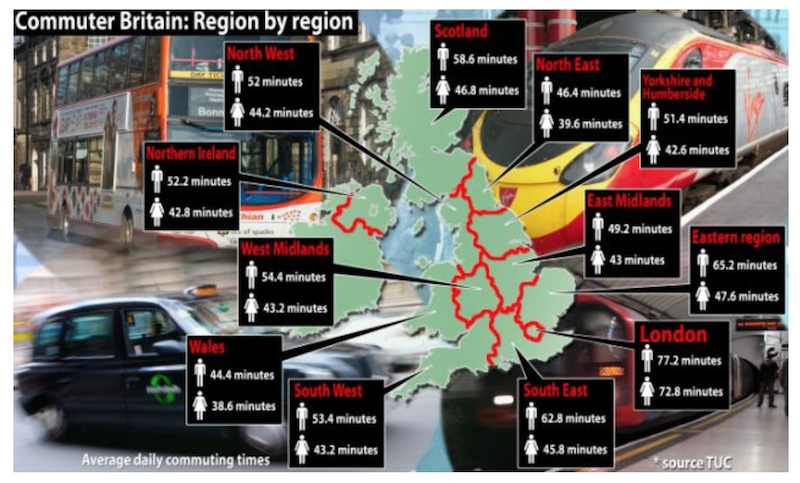 REPORT: This graph shows the average commuting times for men and women across Britain. (Source: dailymail.co.uk). Write a report on how Brits commute differently from one region to another.