B1 B2 Exam Preparation Lesson 15: Sponsorships

The Australian Football League (AFL) and Cricket Australia have refused to sell advertising space to a Tasmanian man trying to raise awareness of the impact of junk food and alcohol advertising linked to major sports.
Aaron Schultz is an ordinary dad. He has two children and coaches and umpires their football team on weekends. He wants his children to be healthy and enjoy the benefits that good team sports can provide. When he grew sick of seeing his children constantly exposed to junk food and grog ads he started a website called Game Changer with the aim of tackling unhealthy advertising in sport.

Recently, he tried to buy from the AFL four 30-second advertisements to run on big screens during matches. He also tried to purchase signage rights at his local sports grounds, Bellerive Oval, from Cricket Australia. He wanted to use the spaces to let people know that there was an alternative to alcohol and junk-food advertising. His requests were refused.
Responding to queries about the incident from a reporter at trade newsletter Australian Doctor, the AFL said:
“it is the AFL’s view that decisions about the amounts and types of food/drink that people consume are decisions for adults themselves, and on behalf of their families, and it is not the AFL’s role to seek to dictate those decisions for people. We support messages around the responsible use of alcohol and moderation for any decision about food/drink, but do not seek to impose restrictions on adults, or the choices they make for themselves and their families.”
It seems that the most watched professional sporting code in Australia (broadcasting four matches a week on free-to-air television and all nine games on pay TV) and one that sells advertising to companies selling all manner of products, including alcohol and gambling, is squeamish about promoting messages about healthy eating.

The AFL’s willingness to leverage its huge profile to influence consumption behaviours through a range of very lucrative advertising activities is illustrated in recent research undertaken by the Centre for Health Initiatives at Wollongong University. The research revealed that, in the 2012 AFL final between Sydney Swans and Collingwood Magpies, 17.7% of the total broadcast time was devoted to various forms of alcohol marketing. This included numerous alcohol promotions within broadcasting screenshots, commercials and fixed advertising.
Across the three 2012 AFL finals broadcasts studied, there was an average of 244 incidents of advertising, totalling 20 minutes of marketing per match. By allowing the ubiquitous presence of alcohol marketing throughout its broadcasts, the AFL (along with the National Rugby League) exposes young people to relentless marketing of alcohol products, despite research establishing that the more children are exposed to alcohol marketing, the earlier they will begin drinking.
Aaron Schultz is not on his own; a study of sports sponsorship completed by VicHealth last year found that 83% of Victorians support the removal of alcohol sponsorship from sports clubs if help is provided to replace clubs’ lost income.
The law has proved toothless for protecting children and young people from the barrage of advertising that “normalises” alcohol. Public support for banning gambling advertisements has also been particularly vocal recently. And it looks like legislative reform could be achieved now that Opposition Leader Tony Abbott has endorsed free-to-air networks’ proposal to ban broadcasting live odds during matches.

The commercial forces stifling Aaron Schultz and his healthy message, however, seem far more difficult to overcome. With its unrivalled profile in the Australian broadcast landscape, the AFL remains free to contract with anyone it chooses to.
But it has denied Aaron Schultz one 30-second advertisement promoting healthy lifestyle choices. Yet it is apparently entirely within its prerogative to grant its major corporate “partners”, including Carlton Draught, up to 570 incidents of advertising per game. This has been calculated to equal more than 39 minutes of broadcast time.

The AFL, Cricket Australia, the NRL and Australian Rugby Union (ARU) all defend their lucrative relationships with alcohol sponsors on the basis that the income they derive from them is beneficial and necessary for the sustainability of their games. But there is an elegant way to let them balance their books while remaining socially responsible.
At the moment, sponsorship doesn’t emanate from the largess of alcohol manufacturers – it is simply built into the price of drinks at the bottle shop. Consumers pay. We can replace this with a very small surcharge or tax, paid by consumers, that goes into a fund to replace harmful promotion with healthy promotion, just as we did for tobacco.
The Australian National Preventive Health Agency’s “Be the Influence” campaign has replaced alcohol advertising in 15 other major sporting Associations, including the Football Federation of Australia (FFA) and Netball Australia.
Can the four big sports – AFL, Cricket Australia, NRL and ARU – follow the lead of FFA and Netball Australia and use their enormous influence to promote healthy choices? Or will they and their star players continue to be ambassadors of booze, betting and junk food?

The event that many of us have been anticipating for the last 4 years is finally here. Yes, the 2014 FIFA World Cup Brazil is happening as we speak. It is time for each country to come together as one in support of their football team. And in turn comes the increased consumption of junk food and drink.

Research from Webloyalty – a consumer research organization – predicts that in the UK, people will spend around £271 million ($459 million) on food and drink for the World Cup.
It is very unlikely that healthy food and drink choices will be included in this spend. In the first week of the 2010 World Cup in South Africa, for example, sales of chips increased by 10% in the UK and sales of chocolate rose by 37%, compared with the same week the previous year.
And it seems this pattern occurs during most major sporting events. During the London 2012 Olympics, sales of sugary drinks increased by 10% in value and 8% in volume, compared with the same period the year before.
But why do we consume more junk food and unhealthy beverages during such events?
Junk food sponsors ‘represent a direct attack’ on public health efforts
According to public health experts, the sponsors of major sporting events are a contributing factor. For this year’s World Cup, FIFA’s partners include soda giant Coca-Cola, while its sponsors include fast-food firm McDonald’s and beer company Budweiser.

Fast-food and sugary drink sponsors of major sporting events, such as Coca-Cola and McDonald’s, “represent a direct attack” on worldwide efforts to reduce obesity, according to de Sá.

In fact, McDonald’s have been an official sponsor of the World Cup since 1994, while Coca-Cola have partnered with FIFA for the event since 1978. The soda company has partnered with the Olympics for even longer – since 1928 – and for the London 2012 Olympics, chocolate company Cadbury even jumped on the bandwagon as a sponsor.
In a recent letter published in The Lancet, Thiago Hérick de Sá, of the Department of Nutrition at the University of São Paulo’s School of Public Health in Brazil, says such sponsors “represent a direct attack” on worldwide efforts to reduce consumption of unhealthy food and drink in order to tackle increasing obesity rates.
Since 1980, the rates of worldwide obesity have almost doubled. In 2008, more than 1.4 billion adults were overweight or obese. As of 2012, more than 40 million children under the age of 5 were overweight or obese.
Such figures have caused global concern, prompting authorities such as the World Health Organization (WHO) to launch campaigns with the aim of reducing obesity rates. Specifically, WHO have set a goal to stop the worldwide increase in obesity by 2025.

ESSAY:  Write an essay exploring the varied commercials and why certain programmes may choose that particular product etc.

LETTER: Write a letter to a TV company asking them to ban cigarette commercials from their station.

REPORT: Write a report on the growing rate of young drinkers as linked with alcohol advertising in sports.

REVIEW:  You have been watching sports (football, baseball) and a commercial promoting a health food is aired at half-time. Write a review on how you feel the audience may respond to this.

PROPOSAL: Write a proposal for a series of adverts to be shown in place of alcohol and junk food commercials. Consider how the new adverts will financially benefit the sport, programme etc.

This visual aid shows B2B marketing roles with the 4 “Ps” of the Marketing Mix (Promotion, Price, Product and Place). Summarise the information by selecting and reporting the main features, and make comparisons where relevant. 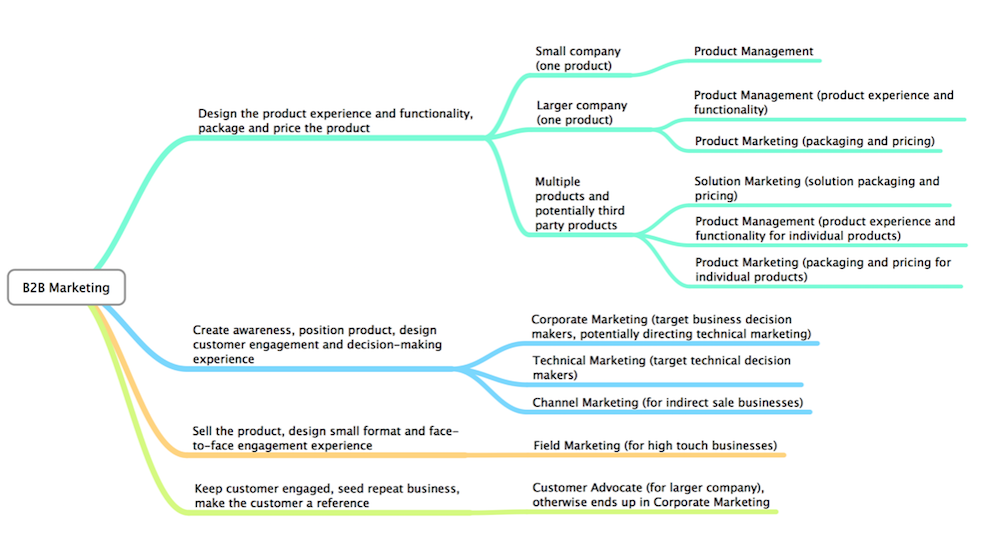