B1 B2 Exam Preparation Lesson 14: Fashion

What your shoes say about you

Paris Fashion Week heralds the finale to what has been a packed calendar of catwalk shows. The designers’ eagerly awaited collections for Autumn/Winter 2015 have been revealed, new trends noted and the commercial wheel for fashion’s next season set in motion once again. As the globe trotting fashion pack jostle for the much coveted front row seats, it won’t be just the clothes they are hotly anticipating, but also the shoes.

Within the commercial sphere of fashion shoes were originally of secondary importance to clothing. But television shows such as Sex and the City, launched in 1998, have catapulted the shoe into mainstream culture as an object of desire and sometimes obsession for many women. Marketing studies have shown that spending in the UK alone on shoes has been increasing steadily, with growth in the footwear market now having overtaken that of clothing.
Sales of shoes in the UK in 2014 were estimated to be worth almost £9.4 billion. The investments that London department stores such as Selfridges and Harrods have made in redesigning and transforming their Ladies’ shoe departments into salons of visual delights and inspirations demonstrates further how important shoes are to fashion. So commercially, it’s evident that shoes are no longer the afterthought to clothing.

The power of shoes
Shoes have always held a significant place in popular culture. Fairy tales and stories such as the Wizard of Oz and Cinderella have presented them as objects that hold transformative, magical and sometimes even dark powers.
And putting aside their role as fashion accessories it is clear that shoes have the ability to transform the wearer – physically, aesthetically and emotionally. As a three-dimensional sculptural form the shoe imposes particular postures on the wearer, influencing how they move and physically feel.
In his seminal work Techniques of the Body, the French sociologist Marcel Mauss explored how particular styled shoes would influence different types of movement on the body. The high heel, for example, repositions the posture, lengthening the calf muscles, pulling the hips inwards, tightening the bottom muscles and pushing the chest forward. The result is a feminine and disciplined body. In contrast, a flat shoe like a Birkenstock allows the foot to spread and the body to relax.
These contrasting shoe styles create different physical forms for the body which influence in turn how the wearer will feel and present themselves, either consciously or unconsciously, to the outside world. The relationship of clothing to the psychology of individuals has been much studied, but shoes, by the very intimate relationship they hold with the body, are also key to constructing identity and meaning for the wearer.

Research has shown that by examining someone’s shoes, it is possible to guess an enormous amount about the owner’s personal characteristics – by some excessive and headline grabbing estimations up to 90% of an individual’s personality.
The high heel as an object of fascination and obsession takes centre stage in most such discussions of shoes as objects that confer meaning. This is a shoe that continually sways between being interpreted as an object of empowerment and confidence for women and one of subordination, shoes that are selected just to please men. The anthropologist Ann Brydon’s study of female academics in America noted their vehement resistance to wearing high heeled shoes in fear of being seen to be frivolous and of inferior intelligence. To assert their academic eruditeness they opted for flat, indiscreet, sensible shoes.
But most women will admit that they buy and wear high heels not for aesthetic reasons, or to please their observers, but simply because of how they make them feel. Wearing such shoes instills confidence and enjoyment, despite perhaps the occasional sensations of pain.
Shoes have been subjected to debates on feminism, fetishism and fashion and through this have become objects that may reveal something about the psychology of individuals. And Paris Fashion Week provides one of the best opportunities to test these theories, so as models strut down the Paris catwalks in their spindly shoes and the audiences mill around in equally eye-grabbing footwear, take some time to analyse their choices.

It is often said that, without interns, London Fashion Week wouldn’t run at all. At last year’s edition of the event, representatives from this usually invisible workforce made an appearance, demonstrating by wearing white t-shirts with the slogan “PAY YOUR INTERNS”.
Reminiscent of the various political messages that have emblazoned the t-shirts designed by Katharine Hamnett in the past, they may not have attracted anywhere near the same amount of publicity or controversy. But these students, like Hamnett, were pointing out an important current issue: the exploitation of unpaid workers or “interns”, for which the fashion industry has become particularly notorious.
It is an issue that has not changed much for the better over recent years, despite increased scrutiny and media attention. And it’s taking its toll not only on the interns, but also on the very fabric of the industry.

Last year, Libby Page was highly critical of the industry’s reliance on unpaid labour in her Guardian article. She also acknowledged the potential benefits of an internship and pointed towards research that states that over 50% of employers said they wouldn’t give a job to a graduate with no experience. Undeniably, in this practical industry, learning through real world experience is valuable, and virtually impossible to imitate in an educational context.
The pro-internship argument usually centres on the impression that an internship is mutually beneficial. But it’s questionable whether this is the case. As most that have been there will tell you, it is known and accepted that interns are expected to perform primarily menial or administrative tasks, or coffee runs, and this for excessively long hours with little or no pay.
Fashion interns are working in these unpaid positions for up to 12 months – far longer than it would seem necessary to decide whether or not they would be suitable to hire for a paid position. This is in exchange for (an often unjustified) hope that it will lead to employment as they are replaced with the next wave of graduates more than happy to work for free. In fashion, having the name of a famous designer on your CV is apparently worth more than any sort of professional experience or insight.

In a letter to the fashion house Alexander McQueen last October, Shelly Asquith, a student and president of the University of the Arts London Student Union, makes some of these problems explicitly clear in response to their advertising a full-time unpaid internship. Despite this exposure forcing the company to issue a formal apology, and despite the fact that the law in the UK states that “integral” work must be awarded with the National Minimum Wage, unpaid internships continue to define the fashion industry.
This is a business model that is not only unproductive and unsustainable, but is in fact detrimental to the industry.
Working without pay has become a “luxury” that is, for most, unaffordable, leaving this “compulsory” experience beyond the financial means of a large group of talented graduates who are consequently unable to find a job in their field. This is especially problematic considering the increasingly hefty investment already made for their education.
Unpaid internships are excluding those probably best equipped to inject fresh insight and stripping the industry of the integrity, skill and craftsmanship that it was once built upon.
Unfortunately, companies seem too shortsighted to acknowledge the consequences of this practice, even as the diversity of their workforce and ability to innovate is compromised, and even as legal repercussions for hiring unpaid interns are on the increase.
This perhaps brings us closer to the essence of the problem: the pervasive mindset around internships that these companies are not only taking advantage of, but perpetuating. It seems many students feel forced to take on an unpaid internship. Students are led to believe it is “the thing to do” and that “everybody has to do it”.
So with the 2014 edition of London Fashion Week in full flow, the catwalks are pulsing with collections made a reality for a large part by thousands of unpaid interns. It is exactly at this moment that it is important to remind ourselves that unpaid internships are also having a negative impact on the industry; devaluing aspects that are vital to its very existence.
It is about time the fashion industry addressed ethical employment as well as ethical manufacturing and materials. But it is unlikely that this shift will be instigated by the industry itself. It is the role of fashion education to empower students to question accepted practices and, like Hamnett before them, challenge that which they feel is unethical or out of balance. After all, these students will define the fashion industry of the future and it is vital that they feel empowered to cultivate new ways of thinking, doing and being fashion.

ESSAY: Write an essay exploring the link between fashion and success.

LETTER: Your school is considering getting rid of the school uniform and allowing students to wear their own clothes. Write a letter to the school in favour of this change.

REPORT: Write a report on the price rise of fashion vs the rise of unpaid internships within the fashion industry.

REVIEW: You have just read an article about a new, cost effective fabric that will decrease the cost of clothing and increase its productivity. Write a review on what this means for the industry.

PROPOSAL: Write a proposal for the way in which income can be earned in order to continually maintain paid internships within the fashion industry.

GRAPH DESCRIPTION:
“Most popular red-carpet designers”: For many in the fashion industry, it’s less about what the stars are wearing than “who” they’re wearing: (Source: http://www.hollywoodreporter.com/news/oscars-2015-dress-photos-775513)
& “Oscar Dress Colors, 2005-2014”

These visual aids show the most popular red-carpet designers and dress colours worn. Summarise the information in both graphs, by selecting and reporting the main features, and make comparisons where relevant. 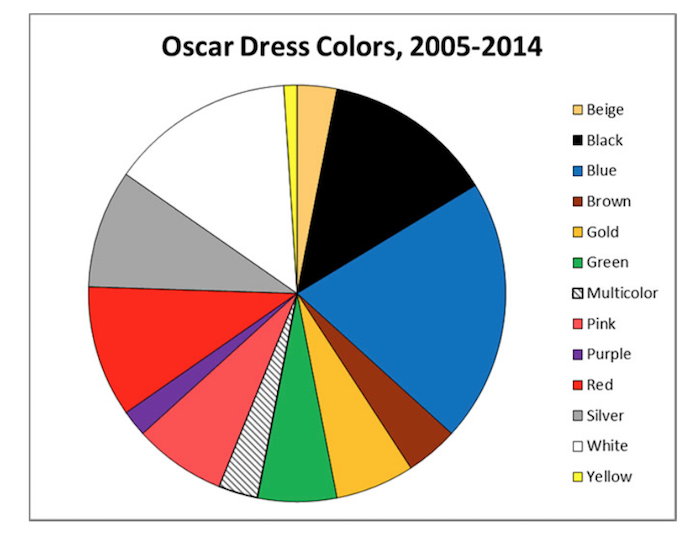 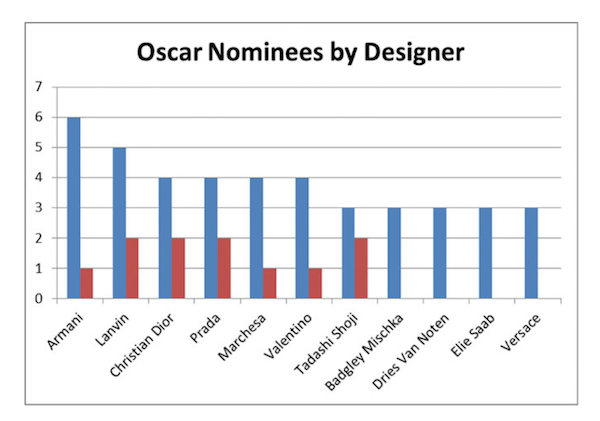