B1 B2 Exam Preparation Lesson 13: Halloween and Thanksgiving

Welcome to Conscious Report. It’s Thanksgiving Week so you guys know what that means. It’s time to do your American thing and eat till you are about bust, and consume, consume, consume.
Yep, that’s right. The day after we give thanks for stolen land it’s the biggest shopping day of the year. Also known as Black Friday.

What is Black Friday?
Black Friday originated in Philadelphia as a term used to describe the heavy congestion of traffic the day after Thanksgiving. Later on, it was explained as the point when businesses begin to turn a profit or “are in the black”. So, businesses have traditionally opened up around 6am on Black Friday, but recently they have made more efforts to grab more of that consumer zombie dollar, and stores have started opening up closer to midnight, with this year, Walmart and other retailers now saying that they’re going to open up at 8pm on Thanksgiving Day, leading it to be called Black Thursday.
So, if that wasn’t enough to tempt you, with insane price deals on the latest gadgets on a Friday, now they won’t even leave you alone on Thanksgiving. It’s not like you want to spend time with your family anyways, especially when they have such awesome sales going on.
But if you do go out there and you decide on shopping, be careful. Some of you may have seen these videos where people have been pushed, shoved and even trampled to death in the pursuit of the latest Wii U, tickle me Elmo, i don’t know. I don’t know what it is that people buy at these stores. I’m not sure why you would even spend your time there, but it’s insanity.
So, why do you go to such lengths to buy these products? Is it that Christmas spirit that drives some of you parents to fight tooth and nail for a new video game for your child.
I think it’s this type of materialist, consumerist mindset that is greasing the wheels of this machine that works against free people night and day. That’s you and I.
It’s not just you and I that’s affected by this, the consumer. It’s also the employees of Walmart themselves. According to CNN, there’s now an organised effort across the country for a Black Friday walk out. There’s expected to be over a thousand protests around the nation. And this is not the first time the employees of Walmart have had issues with the Walton dynasty. In 2006, the supreme court blocked a sexual discrimination lawsuit that involved over a million women.
I personally support these efforts to stand against Walmart. In Houston, where I’m at, there haven’t been any Walmarts in the entire city, the inner city, for our entire existence, and people have fought this happening for quite some time. Walmart’s been trying to get into the city. Recently they succeeded, and they opened up, and since then Starbucks, AT&T, and other corporate chain cookie cutter stores have begun to pop up.

So, seeking solutions. What can we do to combat Walmart and these other corporations that are taking over our communities?
If you truly support the small markets and book stores and venues and coffee shops, internet cafes, then shop there. Tell your friends to shop there. Use the power of your dollar.
In Houston we’ve also organised what’s called The Houston Community Coalition, bringing together organisers in both art, music, activism, sustainability, and also, spiritually minded groups, so we can come together and create stronger communities and use that power to organise on issues that matter to us, such as empowering the community, and not Walmart.
So, this day that originally got its name from police being pissed off at traffic, has now become a term of endearment. Black Friday, the perfect excuse for people to get crazy.
If you really want to show your loved ones you care about them, talk to them , spend time with them. And, if you feel the need to give them something make it yourself, or at least shop local. That way you’ll lessen your chance of your gift having been made in a sweatshop.
So, in closing, enjoy your week, opt out of the TSA, boycott Black Friday and Walmart, and get to work on your community. As always, if you can hear this, you are the resistance.

As October inevitably prompts grizzling about the premature appearance of mince pies and plum puddings on supermarket shelves, so too does it draw laments about American cultural imperialism and consumerism.

Halloween is now a fixture in the Australian calendar. Spooky decorations and themed confectionery are a familiar sight in shopping centres and around 100,000 Halloween pumpkins are grown out of season for carving into Jack-o-Lanterns.

Halloween originates in the Gaelic festival of Samhain, which coincided with the end of the harvest season and heralded the beginning of winter. While there are many Celtic and European traditions that precede Halloween’s commercialisation in the United States — try carving a face into turnip instead of a pumpkin, as is believed to have been the practice in Ireland — its adoption in Australia has largely followed American customs absorbed from film and television.

Groups of Australian children now circulate suburban streets in costume on daylight-savings Halloween evenings “trick-or-treating”. Their quest for sweets prompted a 30% increase in confectionery sales in 2012, according to a study of Halloween’s contribution to child obesity published in the Medical Journal of Australia.

Adults from Generation Y, and to a lesser extent X, are embracing Halloween more warmly than their parents ever did. Halloween parties and nightclub events are common.
Halloween is celebrated by more and more children and younger adults – and many of them are wearing costumes too. If you hear knocking at your door on Halloween, you’re most likely to encounter pint-sized witches, vampires and ghosts (the last-minute sheet with eye holes cut out).

But in North America, and also among the growing number of Australian adults who participate in Halloween, costumes are not necessarily tied to supernatural or “scary” characters. Costumes are just as likely to mimic iconic film and television characters, celebrities and politicians.
The most searched-for costumes this year include Miley Cyrus, Minion from Despicable Me 2, Walter White of Breaking Bad and musicians Daft Punk.

For young women, “sexy” costumes comprise a sizeable proportion of the commercially-made designs available in a way that is not replicated in similarly themed costumes marketed to men.
There are “sexy” women’s versions of common costumes, including animals, pirates, devils, fairy tale characters, and military personnel. But there are also extremely objectifying women’s costumes, such as the “sexy slice of pizza”, “sexy bucket of hot fries” and dozens of other combinations of “sexy” with types of food.

By way of comparison, a male slice of pizza costume is decidedly unsexy.
There is an entire branch of racially problematic sexy costuming, notably of “geishas”, Native American, Inuit and Middle Eastern women. The racist stereotyping across costumes for both men and women has been cleverly countered by the “We’re a Culture Not a Costume” campaign originating from students at Ohio University.
Costumes have the potential to permit the wearer to subvert ordinary social expectations. Nancy Deihl, a scholar of costume studies, points out: “Any time you’re allowed to wear a costume, you’re also allowed to engage in activities outside your normal behaviour.”
Historically, as Valerie Steele has observed, women’s sexy costuming at masquerade balls from the 18th century onward transgressed conventional expectations of feminine propriety.
Today, in the West, where girl and women are encouraged to prioritise sex appeal, sexy costumes do not readily permit the wearer to step outside the norm, but instead to remain firmly within it.

There is nothing wrong with the existence of sexy Halloween costumes for women, or with women wanting to be found attractive. (Even despite the fact that popular demands for men’s costumes rarely call for “sexiness”.)
What is problematic is when the options available for women become so narrow that there is little choice to be anything else. The changing nature of girls’ Halloween costumes shows the requirement to be sexy is now transforming how girls dress up too.
In past decades, girls’ costumes were designed to recreate a particular thing or being, such as a pumpkin, cat, clown or devil. The emphasis in these same themes in modern girls’ costumes is on short dresses, stockings and even thigh-high boots that are then accessorised to faintly resemble a pumpkin, cat, clown or devil.

The word “naughty” recently slipped across from the plethora of “naughty” women’s costumes to a Walmart Naughty Leopard costume intended for toddlers.
As Halloween gradually weaves itself into Australian traditions, commercially-made costumes are also finding their way on to our shop shelves. While cultural differences mean we’re not likely to see the racism of “sexy squaw” costumes or a local equivalent gain acceptance, it is hard to imagine that the overwhelming trend of sexy women’s costumes won’t also be imported, along with the inedible pumpkins.

ESSAY: Write an essay about how important it is for people to celebrate specific holidays.

LETTER: Write a letter to the city council suggesting an event to celebrate a holiday.

REPORT: Write a report on the relationship between consumerism and holidays.

REVIEW: You have just read an article on independent business success during the holiday seasons. Write a review.

PROPOSAL: Write a proposal suggesting a new holiday. Why should it be a holiday?

GRAPH DESCRIPTION:
How Teenagers Spend Money (Source: www.theatlantic.com)
This visual aid shows how teenagers spend their money. Summarise the information by selecting and reporting the main features, and make comparisons where relevant. 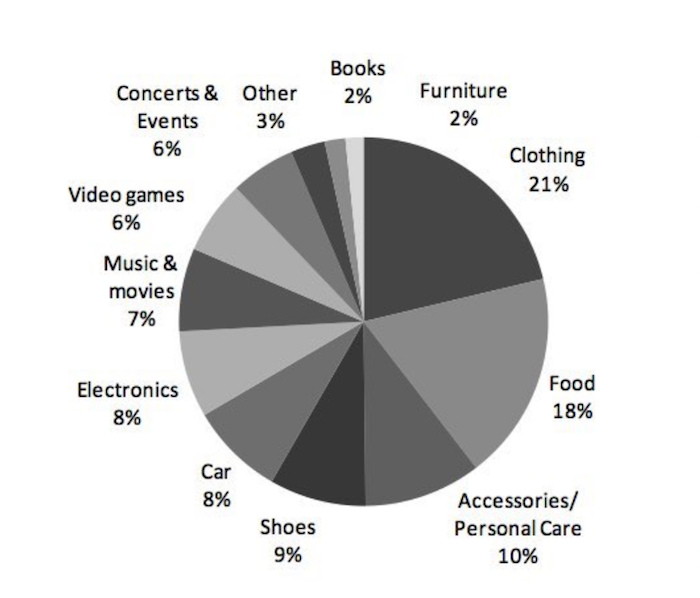